Art Simms
I started bass fishing after watching all of the fishing shows on tv. A few years later I thought I was pretty good, until I entered a few tournaments. I quickly realized that I wasn't as good as I thought and was only donating my money. In 1997 I joined the Viking Bassmasters of the Minnesota Bass Federation to hone my skills with some guys more experienced than me. Since that time I have learned a lot and had some major success. I have been Viking Bassmasters Club Champion three times and won sixteen club tournaments. I was the Fishers of Men Minnesota East division champion in 2006, along with a few money tournament wins and numerous top tens.

Great Fathers day special on Z-Bone ST special run models. $50.00 off and free shipping, check it out at www.kistlerrods.com
Posted by Art Simms at 9:21 PM 2 comments:

Here are my picks for the 2011 Bassmaster Classic on the Louisiana Delta....

Homeboy pick....Derek Remitz. I would love to see homeboy Derek win the Classic, but unfortunately the Delta doesn't fit his style.

Good luck to all the classic contenders!
Posted by Art Simms at 12:49 PM 1 comment:

Merry Christmas everyone! Have a happy and safe holiday season!
Posted by Art Simms at 1:01 PM No comments:

My fishing year is officially over. The boat is winterized and put away, all my reels are stripped and the drags loosened, I am done for the year!
All that is left now is to thank my great tournament partners - Scott and Shawn, for another successful year, my sponsors - Kistler Rods, FlaMinn lures, Mepps and Mister Twister, and most of all my Family for their support.
Over the winter I plan to blog some how-to articles, some reviews on a few new products I used this year, and whatever else I may think of.
For now, thank you to all my readers and have a safe and Happy Thanksgiving.
Posted by Art Simms at 10:11 PM 1 comment:

With the tournament season over and a beautiful day on the horizon, my Brother Scott and I decided to hit one of our favorite North Metro lakes Friday for some hawg hunting. Conditions were sunny and calm with a light South breeze picking up in the afternoon, water temp was 55 degrees. The weather had been stable and with the fall feedbags on, we knew the fish would be biting. We ended up having one of the best frog fishing days we have ever had! Every fish we caught was between 15 and 18 inches with one very fat 19 that Scott hauled in. We estimated out best 5 at around 18lbs! 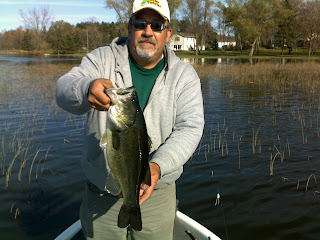 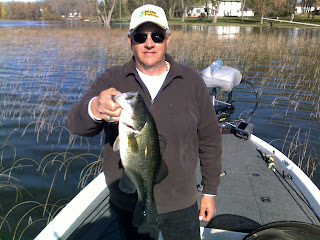 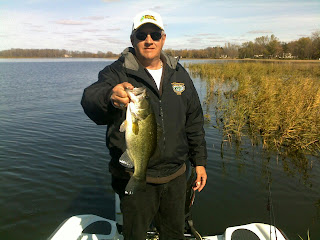 I pre-fished Friday and pretty much eliminated the deep bite. The post turnover conditions had the fish very scattered and we only caught a couple of little fish deep. Our plan was to stay shallow, cover water, and hopefully connect with some good fish.
Tournament morning started out a beautiful 50 degrees and sunny with virtually no wind, warming to about 80 in the afternoon, water temp was about 60 degrees.
Our first spot was a row of docks in Little Green, I started skipping a junebug Mister Twister Comida while my partner Shawn was alternating between a FlaMinn Lures spinner bait and a Subwart. After finishing the docks and no fish we ran to another set where we were able to pick up four small keepers on the Comida.
We then went back into the main lake to another set of docks where I connected with a 16 incher to fill our limit. We continued our dock pattern on the main lake, catching some keepers, but only made a couple small culls.
About noon we decided to fish a small bay that was full of milfoil and lined with lily pads. I was throwing a Snagproof frog while Shawn was throwing a Zoom Horny toad. We had worked about half way in and were working back out when Shawn nailed a 14 incher for a cull. A short while later he connected with a 15 incher for another good cull. At this point I also tied on a Horny toad and we continued working the area for about another hour without another bite.
With about an hour left we decided to run back to the docks in Little Green in hopes of culling a couple more times. We managed to catch fish but nothing that would help.
At the weigh in it quickly became apparent that we did not have a good day. We weighed a limit for 8.34lbs for 13th place. There were a few smaller limits and some teams did not even have limits, so we felt good about that, but twelve other teams did pretty well making me believe we missed something. The winner had over 14lbs, and quite a few bags were over 10 lbs.
Thats it for my tournament season, so now its time to just fish for fun, hopefully the weather stays unseasonably warm for a while, I could be fishing well into November.
Posted by Art Simms at 12:33 PM No comments:

My brother Scott and I arrived at Big Marine Lake to a very chilly 37 degrees and light fog, fortunately the forecast called for sunny skies and light SE winds. The water temp was 49 degrees warming to 59 in the afternoon.
Like every tournament I fish on Big Marine, we decided to start on what used to be my best spot. We were not able to fish exactly were we wanted because another boat was already sitting near the spot, but we were able to position ourselves close enough. After about two hours of casting jigworms to the weedline we managed a small limit with the biggest fish in the 14 inch range.
We next ran to another weedline where Scott caught a 14 incher that replaced a 12. After another hour of working the area and no bites we figured since the better fish were not going deep we would try shallow.
We settled on a reed bed that has produced in the past and started flipping. Almost immediatly I missed a fish that I didn't feel bite. We continued working around the reedbed and Scott connected with a 3 lber which culled our last 12 incher. Next I caught a 14 incher which culled a 13. A short time later I set the hook on another good fish and Scott netted a 18 incher, culling another 13 incher.
At this point we opted to spend the rest of the day flipping the reeds hoping to upgrade the three small keepers we had. The bite slowed but Scott did manage a slight cull with a fatter 14 incher.
The weigh in was typical for Big Marine with mostly 7 and 8 pound limits. We ended up with 10.68 good for 4th place - unfortunately they only paid 3 places. 1st and 2nd place had over 12 lbs and 3rd place was over 11 lbs.
Posted by Art Simms at 8:42 AM No comments:

Please click on the links below to check out my sponsors products.

FlaMinn Lures - from Florida to Minnesota, the hottest lures to hit the water.